There was a great article in the Star Tribune today about housing in North and the direction it should take. 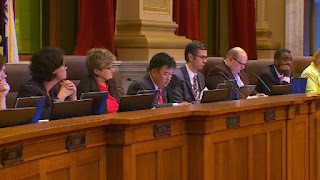 This is a great position to be in as now we're talking about the shape that North is going to take rather than if it can be saved or not or how to go about trying to save it. It offers us as residents a few choices, and going forward no matter how or what happens we're in this for the better.

First off the city is finally paying attention to some of the red tape involved in buying or obtaining a forfeited house. In the past it wasn't a very (from what I'm told) straight forward process and/or it required a lot of capital and planning. So the people who bought these were mostly non-profits who could afford the planning and bonding, or larger corporations, and the odd home owner or not who had capital. Going forward some of this is being looked at to make it easier, maybe not for the every day home owner like myself, but maybe make it to a point where I could take less than $100k and turn one of these houses around.

So no matter what happens to the above we're in a good spot, however according to a housing meeting a month ago the city has over or around 500 of these houses so the process may play out over the course of a long time.

Another thing being looked at is the makeup of North and how it's going to change moving forward. The article points out a few differing opinions, and hints to a few different approaches. One of those is to keep North diverse and maybe more importantly and underlying keep North affordable. This is being talked about more by Blong. He has the position to keep North affordable, and keep it diverse, and to help lower income families afford housing.

Then you have Barb who feels that we should maybe let the free market work a little more and let North become more economically diverse with the influx of what would be middle class home owners. This would, over time, I personally feel, move values higher in North and restore it to what it was before everyone moved out of Minneapolis for the suburbs in the 50's and around that time. It also allows the city to potentially play a little different role in housing.

Right now the general view at the community level is that the city has more control over who can buy tax forfeited housing. However, by having them do that there is more red tape involved and more frustration, but you get that extra control. Part of what I would like to move toward is letting some of these homes, and maybe as an experiment, go to county auction. This would open the door to potentially more and new interest and investment in these homes, provide less red tape, but we would lose some of that control over who could buy them.

I'm for that, or at least for that as an experiment. The city did a great job over the course of the recession and now I believe the market is in a stronger position, and with a few recent changes to county auctions (owner occupied auctions rather than just anyone) allow for some of that extra city control that was enjoyed and welcomed, and in a way the reduction of red tape would allow existing immigrant groups and existing residents an easier path to invest in their community.

That's a more conservative approach, but one that I feel would have the best impact to the area going forward and allow the most investment in North by private individuals. However, as I said before, we're in a great position and this discussion is nothing but good for North. I can't wait and see, either way, what the next 5 years are going to bring.
Posted by Unknown at 9:14 PM